When most people think of coffee, they think of something steaming hot that warms you up as well as wakes you up. But recently, iced coffee has become incredibly popular and there are many good reasons why.

For a lot of people, their first introduction to an iced coffee is a super chocolatey blended drink, topped with whipped cream and chocolate sauce that probably has very little actual coffee in it.

These frappes and Frappuccino’s are essentially caffeinated milkshakes and are most popular with teenagers and young people who are just beginning to discover that need for caffeine to carry them through the day.

What is the difference between a Frappe and Frappuccino? So, what is the difference between a frappe and a frappuccino? Although blended iced coffees differ from one coffee shop to another, the main difference is branding. A “frappuccino” is a signature drink at Starbucks and so the name cannot be used by any other coffee shop or coffee brand.

What is a Frappuccino? Frappuccinos are specific to Starbucks, but they are different in other ways too:

As you would expect from a coffee shop, frappuccinos normally contain coffee. But a lot of Starbucks drinks, especially those on their iced menu, are not only decaffeinated but don’t have a coffee flavor at all.

Frappuccinos can be fruity or creamy or just chocolate flavored. If you enjoy a sweet iced drink but don’t like the normal consistency of a milkshake, a frappuccino can be a nice alternative.

Other than branding, there are still a few differences between frappes and Frappuccino’s.

“Frappe” is the name used by pretty much every other coffee shop that sells iced blended drinks. But that isn’t just to avoid a lawsuit with Starbucks.

Frappes are cold, blended coffees but they are usually a different consistency to a frappuccino. As they are a trademarked beverage, frappuccinos have to have specific features to be classed as a frappuccino.

But frappes can vary from coffee shop to coffee shop, so you can always find something that you will enjoy if you try enough places.

Although the popularity of iced coffee has boomed in recent years, frappes are nothing new. The frappe was actually invented in 1957 in Greece by Dimitris Vakondios who worked as a representative of Nescafe.

Since then, frappes have been a very popular way of drinking coffee throughout Greece and Cyprus. Iced coffees are incredibly popular. They are mostly drunk during the hot summer months as a way of cooling down whilst also countering the tiring effects of the sun and the heat.

Although it is nice to drink colder drinks when it’s hot out, some people actually argue that drinking something hot will cool you down better.

It is believed by some that the heat of the drink will warm up the inside of your body, making it more comfortable in hotter temperatures.

This does sound logical, but our bodies are much more complicated than that. Some studies have found hot drinks will cool you down whereas others have found that they have no effect.

But no matter the truth, iced coffee is becoming ever more popular and is being enjoyed all year round. But, as with frappes, they are nothing new.

The first iced coffee is said to have been made in Algeria in 1840 and is called “Mazagran”. Mazagran is a cold coffee made by combining coffee syrup with cold water. Locals apparently claim that it is the original iced coffee.

Iced coffees were popular throughout the 19th century and were generally hot coffees that had been cooled down with ice. 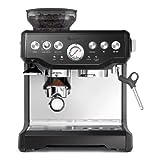